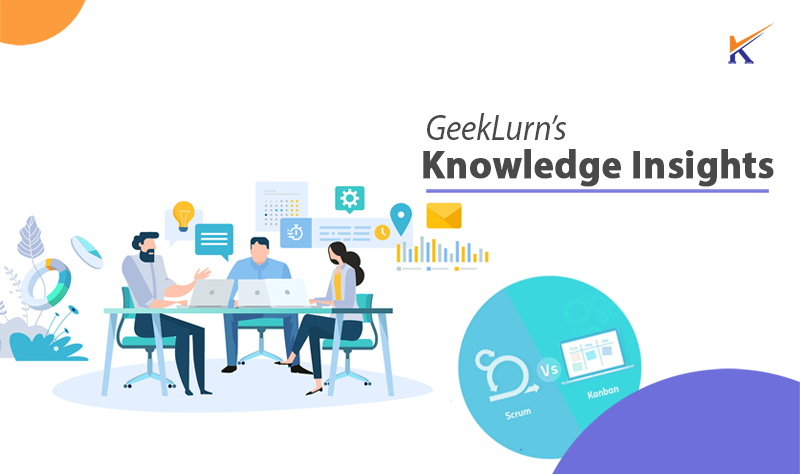 When it comes to Product Management, a lot of syllables comes into the picture. Terms like Scrum, Agile, Kanban are spread like pieces of Jigsaw on the product management platform, which may be a little difficult to be understood by a new learner.

Let me arrange the puzzle for you in a systematic way.

“In terms of Product management, Scrum and Kanban are the two Agile Software methodologies undertaken by the team to carry out a specific task and fulfil organisational goals.”

But then, how can you differentiate between these two terminologies, Scrum and Kanban. Are they even same or different?

Let us understand the frameworks and principles which distinguish these two product values.

In every organisation, there is a communication cycle which holds up the whole process from beginning to the end. Every communication channel has three elements.

In the corporate, these three elements are composed of

Product owners are the authority of any product. There is a development team who work on the project and act as a bridge between product and customers. The customers remain at the receiver end. The value is delivered to the customers by the development team in small increments. A communication cycle is never considered to be completed without feedback and acknowledgement.

The product owner takes feedback from customers and stakeholders, organise the task into and responses into a list listed on the basis of priority setup features and user stories.

The chain of events that happens between product and customers, the power structure, the process hierarchy, the sequence of work done is what differentiates Scrum from Kanban. Each has its own routine and principles. How the workflow will progress within the development team, how to reach the maximum efficiency, all these concerns are dealt with by a single person.

The whole procedure starting from the initialisation of the project to carrying out the task, till delivery, the organisation has got a pull system. In simple words, a pull system is a method or technique to get the work done between product backlog to the customer in the shortest possible time. Let’s see how this pull system is carried out in Scrum and Kanban differently.

According to Scrum principles, Scrum team, work in a series of divided work called a sprint. A sprint is a practised procedure allotted in a weekly timeframe, mostly two weeks in length.

Components of a Sprint:

A sprint planning team is composed of the Scrum master, product owner and the development team. In a sprint planning the members organise the task and carry out them in sequence. There is a product backlog which comprises of task held from top to bottom in reducing priority, i.e. the highest prioritise task is kept on the top and thereon.

The team select the highest prioritise task from the product backlog that they believe can be completed and delivered within the sprint.

The product backlog has all the task compiled for the team to carry out. After a thorough examination, evaluation and deciding which task to take down first, they are arranged chronologically put into a table. This tabular representation is called a sprint Backlog.

The evaluated task undergoes a procedure in parallel where the work is done and progressed methodically. It comprises of a “To do” list, “Build”, ” test”, and “Done”. The task is pushed in of conveniency and capacity of the team to deliver it. At the end of the sprint. The localised work that is done in the end, and if by any chance, it remains uncompleted, it will be sent back to the product backlog. The undone work will be scheduled for the next sprint.

After a period of two weeks, the designated time for a sprint, the work is reviewed and presented before stakeholders to brief them about the proceedings.

A sprint review is followed by a sprint retrospective where the value of each work is assessed by the team, and they analyse what went well, and where there is lag off to pitch in various scope for improvement wherever needed.

This procedure follows for consecutive sprints and thereon.

In the “workflow pull system” Kanban is the one in demand for its pipeline approach of getting things done. It is more customised and follows the principle of ” Only replace after getting consumed” It ensures that no stuffing of work happens and hinders the process.

Unlike Scrum, no unfinished work is pulled back to the product backlog.

In contrary to Scrum, there is no such concept of “two-week sprint”.

It is apparently a continuous process without sprint backlog. It helps to progress and deliver task just at the right time.

Unlike Scrum, there are only three columns, i.e. “Build, test and “done”. Until the done column is empty, it won’t pull any task from the previous column. When the” build” column gets empty, then only the next task will be pulled out from Product backlog.

2. It is capable of quick adaption and task mending wherever necessary and makes the process fast.

3.Flexible scaling of the task according to the requirement.

4. It is easy to maintain the productivity of the team and the efficiency of workflow increases.

5.Profitability increases due to the effective configuration and focussed working strategies.

Be it Scrum or Kanban a Pull system is always helpful in synchronising the team with the workflow. To derive maximum efficiency, to make the delivery on the right time, and the ability to pull back and forth the work channels and task according to the product requirement. All these have been possible due to effective pull system that Product management has proposed. The Agility it shows is helpful in growing organisation to the truest of its ability in the shortest possible time. As I say “Agile gives you more Mile.”

Know how it makes and what it takes to be a good Product Manager.

The latest salary guide for Product management in 2020.