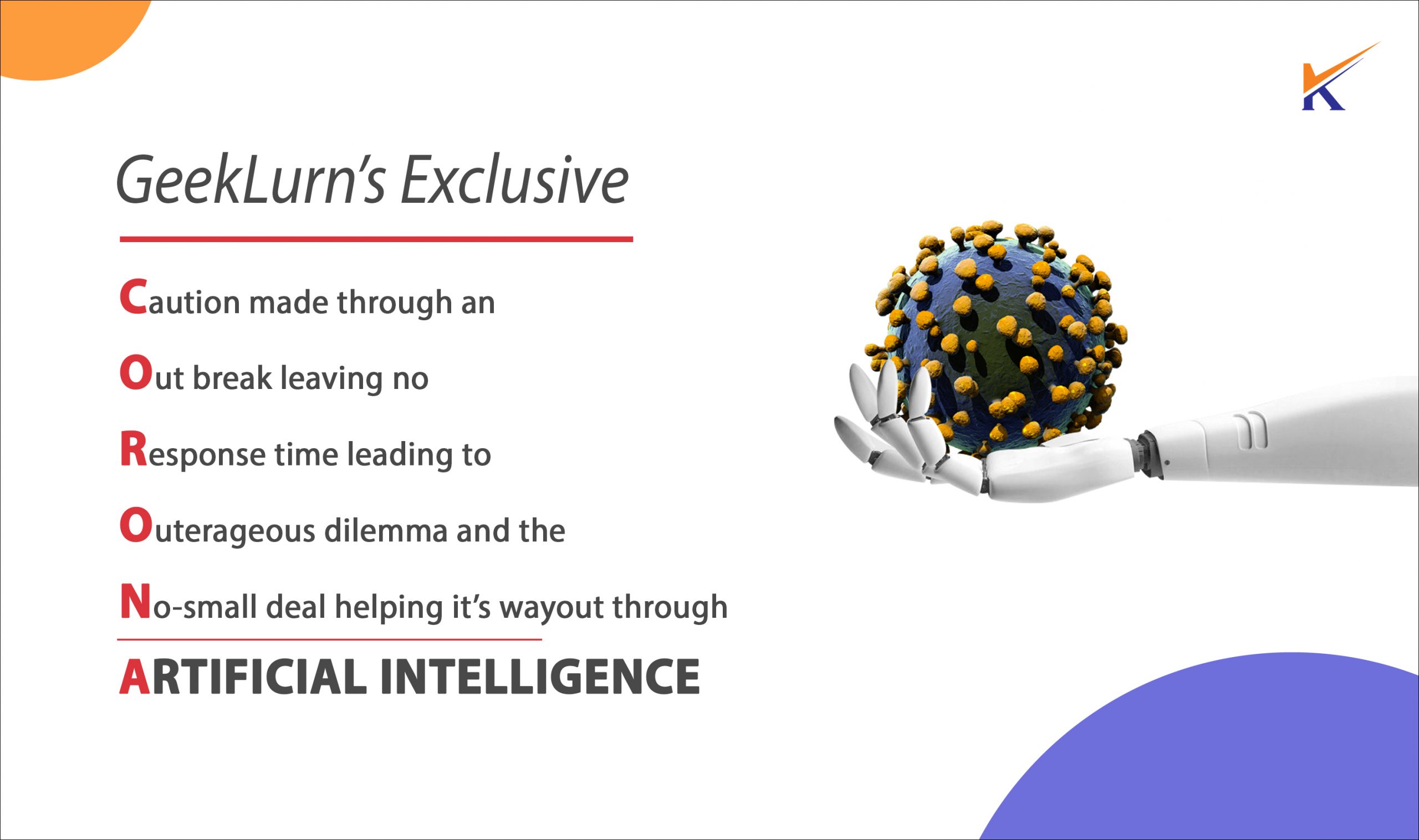 Spread knowledge faster than the diseases spread themselves.

What has brought half of the world to its knees succumbing the air around is COVID-19. The outbreak picked momentum as soon as the Wuhan channels proliferated and mobility of people carrying virus leveraged the outspread to the next level. Apart from it’s epicentre being mainland China, the severity has gone up to 82000 reported case, bringing the fatality to nearly 6000 across 148 countries. (According to WHO, stated on 15 march)

A little beyond human’s control and a little below nature’s intervention there lies the technology.

Yes, On Dec 31st, BlueDot ascertained the outbreak for the very first time. BlueDot is an Artificial Intelligence affiliated company which helps Government, Authorities and Agencies by tracking, locating and conceptualising infectious disease outspread and insurgencies. Before the world could eye on what is waiting around the corners, Bluedot had already foreknew it. The fuel for BlueDot has been the Big Data.

BlueDot insights inculcate a dashboard solution that tracks global prone infectious disease risks and contextualise them upon the location of interest.

After evaluating tons of Data and calculating aspects through NPL( Natural processing language) and ML(Machine learning), scanning 100,000 of articles in 65 languages, it has successfully tracked hundred of diseases, be it Ebola in 2014 or Zika in 2016. Working on similar patterns, the team detected an “unusual outrun pneumonia” spreading its wings around Wuhan and nearby and rose an alarm to flag it. Just a fortnight after, WHO and US centres of disease control declared the authentication of the embarking hazard and made it official.

Does Big Data has the capability to burn the bridge between outbreaks before it turns into a pandemic?

Let’s see how Data and Artificial Intelligence have lent their hands to the rescue. Besides sending the alert, the company was successfully able to identify the cities and countries near to Wuhan that were highly susceptible to get affected by Global airline ticketing Data. The Data is helpful in anticipating where the people will be travelling next. With days the viscosity of the debacle got lessened and gained fluidity among the neighbouring states and countries.

Humans are behaving systems and quite simple. Doctors can verdict upon concrete system symptoms, but when it comes to peripheral ambiguities and seeing hidden complex patterns at a humongous scale, human intelligence is not enough. The flesh and blood limitations are yet constricted and have not been able to encroach the “tends to infinity efficiency”, on the other side, the machine can work around the clock, tirelessly with a fastened decision making capability.

AI-speed-scale-efficiency – is what we name as “A force for a good thing.” AI along with deep learning have contributed towards resolvent through pandemic with various resourceful machines like:

UVD robots are a London based innovative company who specialise in autonomous mobile robotic that implement ultra-violet- C disinfection solution to the health industry at this time of crisis.

When the time demands “social-distancing” amongst humans, these bots have come to rescue where they enter isolation room, carry out the disinfection process, communicate with medical staff, emit ultraviolet of the highest magnitude which can kill viruses including coronavirus.

A worldwide shortage of medical facilities and staff in tending to the the mass at once has provided the scope for these cameras with thermal sensors which do their homework right. This facility was first started at the Beijing Qinghe railway station has now been circulated to all the major probable affected cities and areas of mass assembly. These cameras are mainly thermal sensors equipped with infrared lenses installed at jam-packed huddled areas which can detect forehead temperature for at least 200 people/minute, ie almost a constantly moving crowd.

In the easiest way, the algorithm can be explained as;

//please return me zero, I really want you to be safe from Corona*//

Well, thanks to its extensive work in collecting data from Tongji hospital in Wuhan, it has been able to predict survival rates with 90% accuracy.

This major screening device, which looks like a pistol triggering at every traveller passing by. China has deployed this light device across every checkpoint. This device is also equipped with infrared sensors, which can detect body temperature without actually making any skin contact.

They were also put to work when china was affected by SARS(severe acute respiratory syndrome) in the early 2000s, and when West Africa fell prey to Ebola in 2006. The rays detect and penetrate temperature from a distance, and its accuracy depends on the manhandling the device, as the temperature may deflect depending upon the distance of it from the skin.

They say a drone is often preferred for missions that are too “dull, dirty, or dangerous” for manned aircraft. These are used to check if the mass is adhering to the rules and is abiding by safety measures. It has become essential in the situation where we can’t afford the slightest of leniency as it may cost lives.To keep it in check, the necessity of facial recognition systems has increased all over China.

Facial recognition optimises computer vision techniques to recover distinguishable and discriminative information from facial images, and pattern recognition through machine learning techniques to observe the appearance of faces and classify them.

It uses algorithm such as:

The capability of the recognition system to check whether a face is with or without mask comes from the machine learning technique called SVM( Supervised vector machine), decision trees and ensembling deep learning neural methods.

If you observe, the fingerprint scanning and authentication terminals are the single most common site everywhere. This holds significance for the locations where control comes with a matter of human identity and not as an automatic entry privilege. Offices, datacentres, airports, educational institutions, factories, industries. Though some of the manuals advise germophobes to wash their hands after each use, the uprising corona with its “No touch slogan” has encouraged touchless biometric systems into the picture.

Touchless biometric sensors captivate the niche with high image processing ranging from ultra HD resolutions. The terminals are enabled to have a large number of points for pattern matching. It can be fine-tuned to algorithms to a different level of sensitivity tending to different security levels. One simple hand gesture and you are in.

Nanox, a medical imaging technology company is successfully delivering AI-based x-ray machines installed at public places like airport, seaport and railway stations, which give the tomographic image of the lungs of each passerby. The Nanox system is consist of a Nanox. Arc, a digital x-ray device, Nanox.Cloud and an advisory cloud-based software that provides end-to-end respiratory imaging and early detection.

Apart from detecting and managing, scientist and techies are leaving no stone unturned to exploit the scope of AI and Data Science in finding remedies for the deadly virus. Google AI systems are already waving the scrap out, where every user enquiry about the latest news and happening about Corona will be redirected to authentic websites only. It is invariably trying to remove all the deadlinks which are creating rumours, fake, and unnecessary hype among people exaggerating the severity of the situation.

Artificial Intelligence has been already put to work

Google-owned tributary AI adventure called “DeepMind” has utilised its AlphFold system to extract structure prediction of several proteins associated with the virus with a hope that this will help the scientific community to understand the virus functionality with bigger clarity.

While hopefully wishing for the world to recover from the pandemic as soon as possible, despite all the technological advancement lets not forget our undue part and responsibility to prevent the virus from spreading further. Follow guideline, Take precautions and be safe.

Latest Scope for Career transitions through Data Analytics in 2020

DIFFERENCE BETWEEN MACHINE LEARNING AND DEEP LEARNING YOU NEED TO KNOW.